GALENA, IL — Performers of the June 8, 9 and 14 Cemetery Walk are exploring the rugged lives of early settlers, sharing stories of prosperity and the challenges of intersecting cultures, politics and cholera. 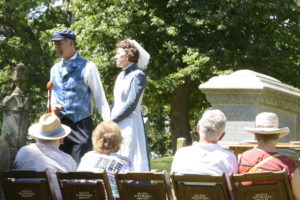 Cemetery Walk is one of the Galena-Jo Daviess County Historical Society’s major fundraising events. A team of researchers, actors and supporters put countless hours of preparation into each year’s Walk to create a remarkable experience.

Writer and Director Ronn Toebaas relies heavily on research by local librarian Scott Wolfe and Historical Society Board Member Kris Chapman to find the facts behind the people who are portrayed in each Walk.

“Finding the information to help build the scripts is an especially monumental task this year,” Toebaas said. “We’re talking about some of the first settlers to come to the area.”

However, the information Wolfe and Chapman found helped to develop eye-opening and touching stories.

“There are emotional stories to tell here,” Toebaas said. “For some of our portrayals, we’re looking at the lives of people who lost everything, built it up again and kept on going. There are many stories of real courage.”

This cast of Galena characters and their re-creators for the 26th Annual Cemetery Walk are:

Hezekiah H. and Charlotte Gear (Michael Crawford and Robyn Davis) were among the earliest of Galena settlers. After much struggle, they prospered immensely from the lead mines and were among Galena’s most philanthropic citizens.

Captain David Garth Bates (Dan Thornton) was one of the earliest of settlers to the Galena area. He began as a licensed trader with the local Indians, purchased a steamer called the Rufus Putnam and carried troop supplies to Fort Crawford and Fort Snelling. He also engaged in lead mining and smelting.

James Russell Jones (Robert Mahan) was one of Galena’s most successful entrepreneurs. He was a friend to U.S. Grant, Elihu Washburne and Abraham Lincoln. He became involved in politics and was appointed to minister to Belgium during Grant’s administration. He built a stately Galena mansion later to be known as the Belvedere.

Galena Victims of Cholera (Robert Armstrong, Ben Behlke, Carmen Ferguson, Ellimena Henderson, Caitriona Terry): Cholera appeared in Galena as early as 1829, and full epidemics hit in 1850 and 1854. Just about every household lost family members. The population had little idea the cause was in the water system.

Florine Sackett Rogers (Lisa Schoenrock) is a member of the Sackett family, which is known for making Galena pottery in the 1850s. Their work has become highly collectible. Rogers was a faculty member in the music department of Illinois Wesleyan University in Bloomington, Illinois.

Joseph and Eliza Waggoner (Phil and Terri Jackman) owned a bookstore in Galena. Joseph Waggoner was instrumental in beginning a Young Men’s Association for intellectual pursuits.

You can be a living witness at Old City Cemetery on Saturday and Sunday, June 8 and 9. Shows start every 20 minutes from 2 to 4:30 p.m. Old City Cemetery is located at North Dodge Street, between Hill and Washington streets.

An indoor, seated performance is set for 7 p.m. Friday, June 14 at Grace Episcopal Church, 309 Hill Street. Admission for both the outdoor and indoor events is $15, and proceeds go to the Galena-Jo Daviess County Historical Society’s mission to preserve the stories of our region.

For more information, phone 815-777-9129 or visit www.galenahistory.org. Tickets are available at the gate only on the day of the performances.