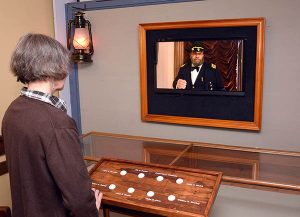 It is no accident that our small town of Galena, Illinois, is considered a hub of Civil War History. After all, U.S. Grant, victorious general and Commander of the Union Forces, and later our country’s 18th President, spent several years in Galena before and after the war. He brought his family here, and it was here that he got the news that he had been elected president.

However, what helps Galena stand out from other home communities to great leaders is this startling fact: Galena produced a total of nine Civil War generals. Is that a record for any town in the United States? Yes, according to Illinois Journal of History, (Spring 1957).

The Galena & U.S. Grant Museum has been telling the stories of all the generals — not just Grant — for decades.

The “Gallery of Heroes: Galena’s Nine Generals,” a new exhibit, opened to the public March 9 in the John & Marge Cooke Military Hall (on the second floor of the museum). 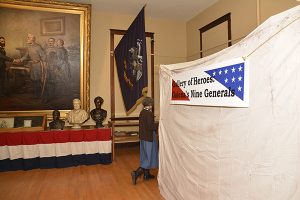 The exhibit is tucked under a pitched officer’s tent next to the iconic Peace in Union. There, a pensive U.S. Grant invites visitors to learn the stories of his compatriots. Push a button, and you can hear these stories from the generals’ own mouths — just as they told them at the Sesquicentennial celebration of Peace in Union in 2015. The exhibit also profiles Emily Clarissa Gear Hobbs and surgeon Edward Kittoe, who tended to injured soldiers.