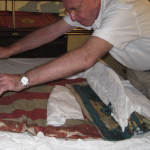 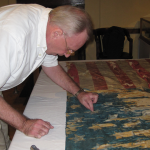 At the time of the Civil War, the Mississippi River was the most important economic feature of the continent–the very lifeblood of America. After the southern states seceded, Confederate forces closed the river to navigation, effectively strangling northern commercial interests. President Abraham Lincoln told his civilian and military leaders, “See what a lot of land these fellows hold, of which Vicksburg is the key! The war can never be brought to a close until that key is in our pocket…We can take all the northern ports of the Confederacy, and they can defy us from Vicksburg.” 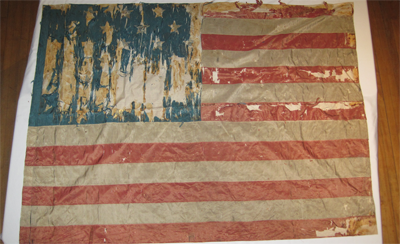 Regaining control of the lower Mississippi River would reestablish important commercial routes. It would also split the South in two, sever a vital Confederate supply line, achieve a major objective of the Anaconda Plan, and effectively seal the doom of Richmond. In the spring of 1863, Major General Ulysses S. Grant launched his Union Army of the Tennessee on a campaign to besiege Vicksburg and provide Mr. Lincoln with the key to victory.

General Grant awarded the honor to the Forty-fifth Illinois regiment – Washburne’s Lead Miners – to lead the Union army’s advance into the defeated city. The regiment’s flag was the first to be raised above the court house to denote the possession of the city by the Federal army. After the flag was taken down it was returned to Galena by General John E. Smith, the first Colonel of the 45th.

The 48-inch by 66-inch flag with 30 gold painted stars had been folded to approximately one foot square and put away into the museum’s storage area. From what could be seen of the flag in its folded state, it was evident that after 150 years the silk had faded and was shredding. The thought of unfolding this treasure to discover its true condition was daunting, yet Galena and the world needed to see this important remnant of America’s War in all its glory.

Historical Society member Bob Tosterud, a Civil War aficionado, led the mission to get the treasure on display. It was Tosterud who discovered that Mr. Harold Mailand, one of America’s best textile conservators, was going to be near Galena teaching a class at the Campbell Center for Historic Preservation Studies in Mt. Carroll.

Special note: Many of you were very observant and noticed that Mr. Mailand was examining the flag without gloves. Mr. Mailand said that in cases of fragile, tattered silk such as a flag, sterile dry hands are the preferred choice. Gloves that are used to protect artifacts from human skin oils can be bulky and cumbersome, sometimes causing more damage when working with textiles and paper.

Mailand is founder of Textile Conservation Services located in Indianapolis. Among Mr. Mailand’s many professional accomplishments in textile conservation are internships at The Textile Museum and the Smithsonian Institution in Washington, D.C.; The Museum of Fine Arts, Boston; and the Costume Institute of the Metropolitan Museum of Art, New York. In addition, Mr. Mailand has written and lectured extensively in North America and Europe on textile conservation practices.

Arrangements were made for Mailand to view and assess the flag. Joined by Tosterud and his wife, Karen, and museum director Nancy Breed, Mailand carefully unfolded the flag. While the blue canton area is in very poor condition, the red and white stripes of the bottom folds were in surprisingly good condition.

“The flag was hand-sewn, most likely by a group of ladies supporting their local troops,” stated Mailand. “At some point in its past it was hand-stitched to a cotton backing and rabbit skin glue was randomly applied to stabilize the fabric. However, the glue is now in a crystalline state, causing the fibers not to be flexible, so the treatment—over time—has proven detrimental.”

Professional conservation would cost many thousands of dollars. So Mailand was asked to use his expertise to place the flag in a display case in its existing condition as best he could. The Tosteruds generously underwrote the cost of Mailand’s professional services.

Fortuitously, just a week prior to Mailand’s visit, a golden oak display case was donated to the Galena & U.S. Grant Museum by Terry Miller, manager of the U.S. Grant State Historic Sites. It was the perfect repository for the Vicksburg flag, being the perfect width and of sufficient depth to showcase the flag with one fold to cover the most severely damaged sections.

Although the flag has generated much interest from Civil War museums including Vicksburg and Kenosha, the flag is in such fragile condition that it will not be loaned out. “The sesquicentennial has generated many temporary Civil War exhibits around the nation,” said Breed. “We are pleased to enter into temporary loan agreements for other significant artifacts from our collection, but the Vicksburg flag is too unstable to move. Folks will just have to come to Galena to see it.” The Vicksburg flag is on permanent display in the museum’s second floor military exhibit hall.