A Galena Look at ‘The Great War’

Who can say why World War I earned this grand-sounding moniker? Those who lived at the time, now some 100 years ago, likely would have described it otherwise. 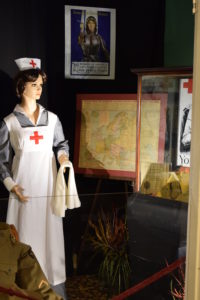 The First World War flung the world into the 20th Century, whether it was ready for it or not. Old-school infantry and cavalry formations and long-practiced battlefield tactics were abandoned, and the meaning of ‘battlefield’ even took on a different meaning. The reason for this evolution was largely due to technology. Manned flight, refrigeration, automobiles, automatic rifles, advancements in artillery, developments in medicine, and a number of other significant inventions turned warfare into something even more destructive and more deadly than it had ever been. This set the pace for the rest of that eventful century.

More than 500 young men from Jo Daviess County served in the U.S. military during WWI, and nine young women served as nurses. Not all of them saw action on the front, but 35 of the men did not return and several died from war-related causes after coming home.

Jo Daviess County’s first loss was Herman Fickbohm, a miner for the Frontier Mining Company, who left for training at Camp Grant, in Rockford, on September 22, 1917, sailed for France on May 8, 1918, and died less than three months later. Herman’s story, and those of many others, is retold in the World War I exhibit. The United States, and therefore the local Galena citizenry, fought on the side of the Allies. The exhibit offers details about Galenians’ involvement in the conflict. Some of the exhibit’s featured artifacts include:

• uniforms, helmets, artillery shells and an array of photos from the front lines;
• a collage of every service person from Jo Daviess County with a legend to identify each individual;
• loaned artifacts including hand-knit items sent to the soldiers in Europe to help them keep warm; and
• a nurse’s uniform reproduction accompanied by a discussion of the roles women played during the war.

“While we rightfully focus on Civil War history because of our remarkable relationship with Grant and the other eight generals, we can’t forget other critical wartime periods in our history,” says Curator Ray Werner. “Many Galenians served with honor and warrant our attention.”

Werner also offers thanks for some valued volunteers: “We are grateful to Ronn Toebaas and Kris Chapman for their continued involvement in creating this exhibit. Their attention to detail is a huge benefit, helping to ensure a first-class educational experience for our visitors.