There’s one in every family: the keeper of history, the person who preserves old letters, photos, and genealogy documents. On my mother’s side, it was my Grandma Byrum. For fellow Stockton native Blake Rowe, it was his mother, M. Eileen Carpenter Rowe (1916-1999). 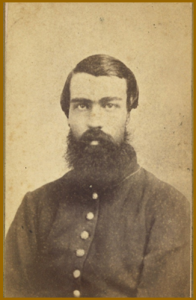 As a young adult, Blake once asked his mom what was in that small wooden box on the shelf and all she said was “some old stuff.” It was not until the passing of his father, Lawrence, in 2002, when Blake was going through their personal effects that he discovered the “old stuff” was a collection of nearly 50 letters written during the Civil War by Private Cyrus Tucker of the 92nd Illinois Infantry to his wife, Mathilda, and his mother and brother back home in Jo Daviess County. The Tuckers owned a farm just south of Stockton.

Not many people in the family knew of the existence of these letters, and Blake was surprised to find them. He shared them with a cousin, who transcribed the letters exactly as Cyrus wrote them, with little or no punctuation and numerous misspellings. The words have to be sounded out phonetically. In almost every missive there is an apology, “Excuse this auckward writing.” and “Can you read my leters? I hope you don’t show them to any boddy, they are so poor rote.”

Despite his lack of polished prose, what shines through Tucker’s letters is his love and concern for his family, his belief in the Union’s cause, and insight into the daily life of an ordinary soldier. By inference, we also glimpse how his beloved Mathilda is coping back home as a single mother of three boys, the youngest just 5 months old when his father enlisted.

(NOTE: punctuation added and some portions edited to assist the reader)

My Own Dear Wife, 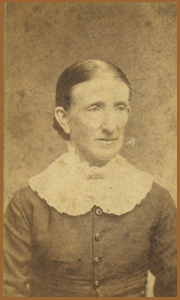 I have received two letters from you since I rote last, one of them was dated the 9 the other the 12. They told me that you had got your money safe and that you was all well.

I am sorry you have such bad luck with your cow. If you cant keep her at home you had better sell her hadent you think? I hardly know what you will do this winter. I am afraid you cant keep house alone without suffering. I some times think you had better sell off your things and board but I cant tell as well what you had better do as you can under the existing circumstances. Do you think you can stand it without you husband 13 months longer? It seems hard dont it, Mattie? We cant tell what will happen but I expect I will hafto stay that long yet. Oh that ante verry long time.

Bush whackers are verry trublesom in this country. They killed 3 of our Soldiers the other day near Casville. Hung one to a tree by the neck and left him hang. Our scouts are hunting them evry day now. I think they will rid the cuntry of them after while.

This is a beautiful Sabbath day. I got my break fast this morning and curried my mules and help clean out the yard. Then I concluded I would spend a little time riting to my better half and the little off springs. I hardly know what to rite to my little boys but I am verry sorry they make their mother so much trouble when their father is gone. I guess the best thing mother can do with them is to ti them up. If they don’t mind better father cant send them any more money to by things with.

Yours with much love. Good by.

I will put a little money in for luck. Well, good by.

Cyrus Tucker went missing in action in September 1864. An affidavit by his Captain reported he went on a foraging expedition which was attacked. He never returned. His saddle was found and was covered with blood. Other prisoners captured at the same time and place saw nothing of him while in prison. Civil War Widow’s Pension files show Mathilda received a widow’s pension of $8 per month plus $2 a month for each child until they became 16. Mathilda remarried in 1868 and all pensions stopped. She had two children with her second husband, including Blake Rowe’s grandmother.

And, in a twist of fate, the 5-month old baby Cyrus Tucker left behind when he was mustered in grew up to marry Cora Byrum, which makes Cyrus my great great grand uncle.