Coming of the Railroad

“The Realization of What Has So Long Been Hoped For”

Westward expansion was a dominant part of the American scene during the nineteenth century. It was during that time that Galena was the center of the lead mining region of the Northwest. The transportation connections to the east were mainly by way of the Mississippi River or the overland stage. It was only a matter of time before a railroad connection with Chicago, Illinois or other cities became a reality.

Progress in that direction started out with the Galena and Chicago Union Railroad Company in 1836, but a number of years would pass before any track was laid. In 1852, the Galena & Chicago Union Railroad had reached as far as Rockford and the following year, Freeport. When the railroad finally did arrive at Galena in 1854, it was a branch of the Illinois Central, extending from Freeport. 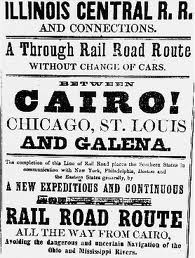 Having read through the Galena Daily Advertiser for the years of 1853 through 1855, I would like to share that research and give a progress report on the building of the railroad in Jo Daviess County, as it was reported in the newspaper at that time.

On November 14, 1853, the Galena Daily Advertiser carried an article on Nora, Illinois: “This town is situated 31 miles from Galena on the Central Railroad. It is in the midst of a splendid farming country, and will ultimately make a town of considerable size. The Railroad Company is now building a depot there.” 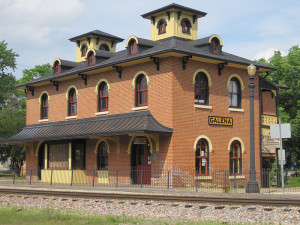 The November 17, 1853 GDA (Galena Daily Advertiser) – “We learn that the construction train on the Central Railroad will run to Nora sometime this week, if the weather continues favorable. The company is also putting up a freight depot at Warren andthe track is to be immediately laid to that place.”

November 28, 1853 GDA – “The work on theGalena Branch of the Illinois Central Railroad is being pushed forward rapidly. In about sixty days, twenty-four miles of track southwest of Freeport will be completed, leaving but twenty to twenty-five miles to Galena unfinished. This twenty-five miles is very hard work and will not be finished for some time.”

The January 10, 1854 GDA reported: “The Illinois Central Railroad was opened for passengers from Freeport to Warren. This opens the first railroad communication with Jo Daviess County.”

In March of 1854, the Advertiser reported that the workers on the Illinois Central are nearly all on strike as they are receiving one dollar a day, and the workmen demand a dollar and a quarter.

The July 17, 1854 GDA reported that the grading for 52 of the 67 miles from Freeport to Dunleith was completed. Since a number of locations in Jo Daviess County were of difficult terrain, there was a lot of heavy work to be done which slowed down the progress.

August 23, 1854 GDA – “There is now a full complement of hands employed and everything moves with animation.”

September 13, 1854 GDA – “The first regular passenger train of cars arrived at Scales Mound, from Chicago, somewhat over their expected time, when the road gets better acquainted with the new notions of the county.” [sic]

The GDA for October 28, 1854 carried the news that “a train of cars from Freeport ran over the Illlinois Central Road into Galena for the first time. This event was hailed with the liveliest satisfaction. It is the realization of what has so long been hoped for.” 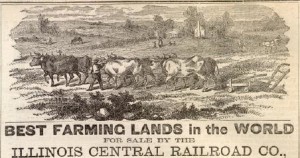 In early November of 1854, a celebration was given at Galena in honor of the completion of the railroad there. The work westward continued.

May 7, 1855 GDA – “The engineers have got considerably advanced in laying down the track on that part of the road between here and Dunleith, and if the company can get the iron, we may hope to see the cars running sometime in June. There is some anxiety to see this part of the road completed, as our merchants and businessmen expect a large increase of trade with the additional facilities it will give our Dubuque and Iowa friends of getting to us.”

May 9, 1855 GDA – “Yesterday forenoon, about half past 9 o’clock, the first locomotive, with the construction train of the Illinois Central Railroad, crossed the Galena River, on the handsome bridge built for that purpose. The train moved slowly to test the structure, which was fully adequate to the weight brought to bear upon it.”

June 1, 1855 GDA – “The Railroad track between Galena and Dunleith was connected yesterday. The regular trains will commence running there next Monday.”

July 9, 1855 GDA – “The cars of the Illinois Central Railroad have been running through Dunleith a little more than a month. The sales of our wholesale grocers have increased during that month from 10 to 50 percent…The trade of the city in other departments must also have largely increased…”

The arrival of the Illinois Central Railroad opened up a good part of the county for the transportation of people and goods. Many towns and communities grew and prospered because of it. This progress continued with the addition of more railroads in later years. It is an interesting part of our history to look back upon.