Galena’s history began early in America’s quest to explore the West. Here are a few of the many highlights in Galena’s past.

1690-Frenchman Nicholas Perrot established a trading post on the east side of the Mississippi River opposite the present site of Dubuque, Iowa. He visited Indian-operated lead mines on the Fever River (now the Galena River). Lead was already a trade article with the French.

1816-Captain John Shaw of the U.S. Army reported Indians along the Fever River mining lead from the “Buck Lead” north of Galena. The first boatload of lead ore was shipped down the Fever and Mississippi Rivers by Col. George Davenport, after whom Davenport, Iowa is named. 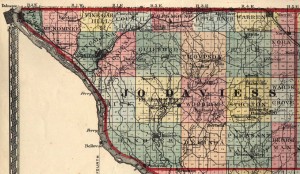 1818-John Tyler Armstrong built a cabin on the east bank of the Fever River, probably in the vicinity of the Illinois Central Railroad Depot (Information Center). It was the first recorded permanent settlement on the Fever River.

1822-The first mining lease was granted by the federal government to Col. James Johnson, who brought 20 white miners and perhaps 50 slaves from Kentucky to work his claim.
The Winnebago Indians resisted at Johnson’s landing, insisting they had not ceded the land to the United States, as had the Sauk and Fox Tribes.

1823-The Virginia becomes the first steamboat to ascend the upper Mississippi River. Meanwhile, Dr. Moses Meeker and his colony arrived on the keelboat Colonel Bumford, and Meeker began smelting lead. Among the party was 15-year-old Daniel Smith Harris, destined to become the most prominent steamboat captain on the Upper Mississippi River.
Over 425,000 pounds of lead ore was shipped from Galena, or “January’s Point”, as it was then known.

1824-The U.S. Government appointed Lieutenant Martin Thomas as mine agent to issue leases and collect royalties for the Federal Leadmine District. Miners and traders flocked to the Point.

1826-Lieutenant Thomas began to lie out streets and lots.
The first post office in northern Illinois is established at the corner of Main and Perry Streets.
John Dowling’s trading post was built about this time of native limestone. It is one of the oldest buildings still standing in Galena.
And the name Galena is chosen for the growing community. Galena is Latin for lead sulfide.

1827-Jo Daviess County organized; it was named after a Kentucky lawyer and militia officer who fell at the head of his troops at the Battle of Tippecanoe in 1811 in Indiana.
Steamboats began regularly scheduled service between Galena and St. Louis. Large numbers of miners began arriving, including settlers from Lord Selkirk’s failed colony on the Red River in Canada. H.H. Gear arrived in the Lead District and began mining near Council Hill.
The short-lived Winnebago Indian uprising in southern Wisconsin sent many miners and farmers to Galena for protection.

1828-In February, the steamer Josephine had to break through the ice in the Fever River to deliver flour to residents of Galena, who were desperately short of provisions.
Galena saw its first serious flood, with steamboats floating down Main Street.
The Old City Cemetery was established on Quality Hill, between High and Dodge Streets.
James Jones begins publishing the first newspaper in the Region, the Miner’s Journal.

1832-Daniel Smith Harris and his brother, Robert Scribe, began construction on the Jo Daviess, the first steamboat built on the Fever River.
The Blackhawk War broke out. Indians defeated the militia at the battle of Stillman’s Run, which caused panic in the Lead District.
The Stockade was built in Galena and settlers flocked to town. Blackhawk and his people were defeated at the Battle of Bad Axe, Wisconsin.
A new mining boom began as Indian claims were extinguished.

1838-The First Presbyterian Church was constructed. (The steeple was added in 1854.)
Galena Temperance Society formed to “combat excessive drunkenness” in the town’s saloons and “groceries.”
Galena’s first Chamber of Commerce was organized.

1839-Dredging began on the Fever River as the silting problem worsened-a result of soil erosion caused by mining, excessive cutting of trees for smelters and steamboats, and farming.
Samuel Hughlett began smelting on a small tributary of the Fever River, known today as Hughlett’s Branch.

1841-The state legislature granted a charter of incorporation to the City of Galena. A census revealed 650 houses and 2,225 people in the city. Toll bridges were built at Bouthillier and Franklin Streets.
The Galena River was over 200 feet wide.

1843-Manufacture of Galena pottery began at the D.A. Sackett and Co. kilns on Dewey Avenue.

1845-Lead ore production in the lead region (Galena, IL area; Dubuque, IA area; and southern Wisconsin), peaked at 54 million pounds, representing more than 80 percent of the nation’s total. Most of it was shipped out of the region on Galena steamboats.

1846-The Market House opened for business. A farmer’s market operated on the first floor and outside on the square until 1910. The City Council chambers were located on the second floor until 1938. The building is now an Illinois State Historic Site.

1847-The government began to sell land in the Lead District to private owners, after more and more miners and smelters circumvented payment of royalties on leased land, thus rendering the leasing system ineffective. Drawbridges were built at Meeker and Spring Streets. Construction began on Grace Episcopal Church on Hill Street.

1851-An Italianate-style firehouse was built on Bench Street. The Old No. 1 Firehouse is believed to be the oldest firehouse of its type in Illinois.

1852-Elihu B. Washburne, who was to become one of the most powerful men in the nation, was elected to his first term in U.S. Congress.

1855-The five-story DeSoto House opened its doors for business and quickly claimed the reputation as being one of the finest. Although two floors were removed in 1880, the building still stands today as the oldest operating hotel in Illinois.

1856-Abraham Lincoln spoke from the balcony of the DeSoto House. St. Mary’s Catholic Church was constructed according to the plans of missionary Father Samuel Mazzuchelli. The worst Galena fire ever devastated many Main Street buildings. Ordinances now prohibit buildings constructed of wood in the downtown area.

1857-Ely Parker, part Seneca Indian, was appointed superintendent of construction for the U.S. Customs House and Marine Hospital in Galena. The Customs House, built to register Upper Mississippi steamboat cargoes, was also the new Post Office. Today it is the second oldest continuously owned and operated post office in the nation.
The Methodist Church was built on Bench Street. Later, Ulysses S. Grant and his family worshipped there.
The Illinois Central Railroad Depot was built. It is now the Tourist Information Center.

1859-The Alexander Jackson home was constructed on Bouthillier Street. It became the home of Ulysses S. Grant in 1865 and is now the Grant Home State Historic Site.

1860-Ulysses S. Grant and family arrived in Galena and rented the house at 121 South High Street. Grant went to work in his father’s leather goods store as a clerk for $600 per year.

1861-The War Between the States broke out. Ulysses S. Grant trained volunteer troops. He departed with militia for Springfield, hoping for a commission in the regular army.
Daniel Smith Harris’s Grey Eagle, the fastest steamboat on the Upper Mississippi River, sank at Rock Island, Illinois and the captain retired from the steamboat business but stayed active in the Galena business community.

1865-Grant returned from the Civil War in triumph and was given a huge reception and home in Galena by prominent Republicans. Galena’s Democratic administration played a very small roll in the festivities. David Sheean was elected Mayor.

1868-Grant ran for president. His campaign headquarters were located at the DeSoto House. Grant received election returns in the library of Elihu B. Washburne’s house, now a State Historic Site.

1874-Turner Hall was built by the Turner Society for various community events and “entertainments of respectable character.”

1890-A lock and dam was built near the mouth of the Galena River, functioning until 1921. Because of siltation, the river channel continued to decrease in size while intensity and frequency of floods increased.

1891-The bronze statue of Grant and the Soldier’s Monument was installed in Grant Park.

1893-During the nationwide economic depression, many Galena businesses failed.

1904-Grant’s home was given to the city by the children of U.S. Grant.

1906-The high school building on Prospect Street was completed. It is now Galena Green Condominiums.

1908-The Galena Public Library on Bench Street was constructed, funded by the Carnegie Foundation and B.F. Felt estate.

1911-A tornado caused severe damage to the roof of the Grant Home.

1926-Turner hall was gutted by fire. It was reconstructed in the 1930s as part of a WPA project.

1928-Hard surfacing with concrete of U.S. 20 completed through the city of Galena.

1932-Congressman Leo Allen was elected, and began 28 years as the district’s congressman. He was instrumental in getting funding for a dike and floodgates on the Galena River.

1937-The worst flood in Galena’s history occurred. Five feet of water was recorded on Main Street. There was serious damage to main downtown buildings.

1951-Construction was completed on the dike and floodgates, finally protecting Galena from floodwaters.

1968-Over 85 percent of Galena is listed on the National Register of Historic Places.

1973-Frank Einsweiler, strong preservation advocate was elected to the first of four terms as Mayor of Galena.

1974-Amtrak began regularly scheduled rail passenger service to Chicago on the Black Hawk. The service was discontinued in 1981 due to low ridership, poor management, and lack of funds.

1978-Reconstruction on the Coatsworth Building was begun. The Coatsworth at one time housed J.R. Grant’s leather shop where Ulysses worked. It is now a senior citizen’s center.

1984-A new U.S. Highway 20 bridge across the Galena River opened to traffic. It was dedicated as the Frank L. Einsweiler bridge.

1987-The Alice T. Virtue Memorial Water Park opened, featuring two swimming pools, a waterslide, and sand volleyball court. It was named after a life-long Galena resident whose estate provided money for the project.

1988-Frank Einsweiler retired as Mayor of Galena after 50 years of community service.

1990-The City of Galena received a $684,800 grant for renovation of Turner Hall. Work began as sprinklers, fire alarms, and a stage loft were added. The wood floor on the main level, as well as many windows and doors, were replaced. This stage of Turner Hall renovation was completed in June 1992.

1995-Jo Daviess County Convention and Visitor’s Bureau moved into the Old Waterworks Building at the corner of Park and Bouthillier Streets.

1996-The Galena/Jo Daviess Chamber of Commerce began a major rehab of the Old Railroad Depot.