Upon his return to Galena with the 45th Illinois Volunteer Infantry Regiment on July 22, 1865, General John Duer addressed a group of celebratory citizens: “We went forth to fight the battles of our country with the single purpose of doing our duty, and if we have succeeded in convincing our friends at home that we have never fallen short of this, our happiness is indeed complete.” Galena Daily Gazette Saturday July 23rd 1865. 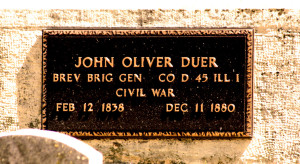