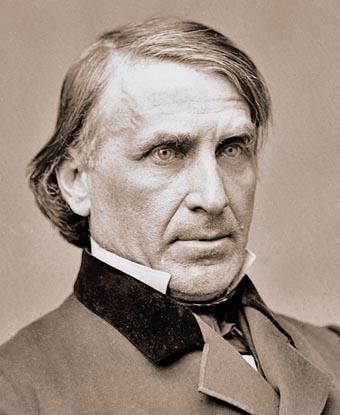 If you would like to learn more about this important Galena resident from the 19th century, please join us on February 12th, 2023, for a discussion of Civil War Congressman Elihu Washburne and the significant role he played in the lives of President Abraham Lincoln and President Ulysses S. Grant. The discussion will be led by Mark Washburne, who has written and published a multivolume biography of Elihu Washburne. Mark Washburne is a Professor of History and Political Science at the County College of Morris in New Jersey and is also a distant cousin of Elihu Washburne.

“About all I know of Grant I have got from you,” wrote Abraham Lincoln to Congressman Elihu Washburne in 1864. “I have never seen him. Who else besides you knows anything about Grant?”

Elihu Benjamin Washburne was not only the link between President Abraham Lincoln and Union General Ulysses S. Grant, but Washburne himself played a major role in both their lives as they rose to power and throughout their presidencies. An Illinois Whig from Galena, Washburne was active in the anti-slavery movement and became a Republican as soon as that party was organized. Elihu Washburne served eight successive terms (1853 to 1869) and was elected to a ninth in the House of Representatives, where he earned the titles “Father of the House” and “Watchdog of the Treasury.”

Congressman Washburne was also an early supporter of Lincoln who advised the future President during the Lincoln-Douglas Senatorial Debates in 1858 and was given the honor of writing Lincoln’s campaign biography for the 1860 Presidential race. In February 1861, Washburne was the lone representative to meet Abraham Lincoln in Washington, D.C. when the President-elect opted to take an earlier train to avoid assassination rumors as Lincoln traveled through the slave state of Maryland on his way to his inauguration.

After the firing at Fort Sumter that started the American Civil War, Congressman Washburne called a meeting in his hometown of Galena to raise troops. One of the people who showed up at that meeting was a man who had gone to West Point; who had been cited for bravery during the Mexican War; and who was now working at his father’s tannery shop in Galena. This man, of course, was U. S. Grant and even though he was nominally a Democrat, the Republican Congressman could spot talent and chose Grant to preside over the meeting. After this meeting, Washburne and Grant became longtime friends and the Galena Congressman helped the Galena General move up in the ranks of the army.

During the Civil War, Washburne was an eyewitness to several battles including the First Battle of Bull Run, Vicksburg, the Wilderness Campaign, Spotsylvania Courthouse, Cold Harbor, and Petersburg. Washburne, at the invitation of General Grant, also witnessed Confederate General Robert E. Lee’s army surrender at Appomattox Courthouse in April 1865. Shortly thereafter, Elihu Washburne served as a pallbearer at Lincoln’s funeral.

After the Civil War, Washburne was a member of the joint Committee on Reconstruction and chairman of the Committee of the Whole in the Impeachment of Andrew Johnson in 1868. Also in 1868, Washburne became the unofficial campaign manager for Grant. Grant actually learned that he had been elected the 18th President in Washburne’s parlor in Galena.

In 1869, President Grant honored his old friend by nominating him Secretary of State and then Minister to France. Washburne presented his letters of credence to Napoleon III in May 1869 and was present the next year for the Franco-German War. During that war, Minister Washburne distinguished himself as one of the only foreign diplomats to remain in Paris during the German siege of that city and later the Paris Commune. Washburne remained Minister to France until 1877 when he returned to Illinois and set up residency in Chicago. In Chicago, he wrote several books and was elected as the President of the Chicago Historical Society.

In 1880, Elihu Washburne was nominated as a Republican candidate for President at their Chicago convention, receiving over forty delegate votes in a losing cause to the eventual winner, General James Garfield, who later became President.   At that same Republican convention, Washburne came in second place in the balloting for Vice President. In the contest for the number two spot, Elihu Washburne lost to Chester Arthur, who replaced Garfield as President after that Chief Executive was assassinated in 1881.