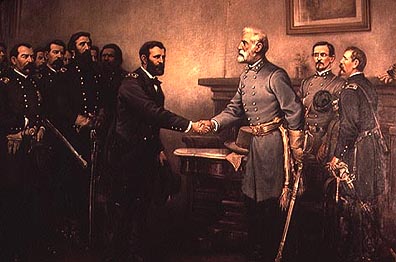 A National Treasure “Peace in Union” by Thomas Nast 1895

Gathered in the parlor of the McLean Home in Appomattox Courthouse, Virginia, with a crowd of Union soldiers surrounding the premises, General Ulysses S. Grant formally accepted the surrender of General Robert E. Lee. Present in that space, during perhaps the most axial moment of American History since the Revolutionary war, were four men with strong Galena connections:

Ulysses S. Grant: who had lived in Galena with his family for only but a year before the onset of the Civil War but who had ever since considered it his home. Grant after serving as General in the Civil War and accepting the formal surrender of Lee, served two terms as the 18th President of the United States.

Ely Parker: Came to Galena mid-1850s as a civil engineer assigned as superintendent of constructing Post Office/Custom Houses in Galena and Dubuque, as well as the Marine Hospital in Galena. Brigadier General, later served as Secretary of Indian Affairs in the Grant Administration

Orville E. Babcock: After attending West Point Military Academy entered the Army Corp of Engineers. Served with General Grant in the Civil War, eventually achieving the rank of general, and courted Anne Eliza Cambell of Galena during that time; they married November 1866. Served as President Grant’s private secretary in the White House (though not a flawless experience)

Standing in the room that day—at America’s most axial moment—were a tanner, a lawyer, and an engineer. These were not soldiers, warriors, or slaughterers. These were people who dedicated their lives to helping people and went to extraordinary lengths to protect their nation.

We feature a large exhibit area devoted to original weaponry, prints, letters and photographs. Keeping watch over our gallery is the original “Peace in Union” oil painting (9′ x 12′) depicting Lee’s surrender to Grant at Appomattox in 1865. (Quality prints of “Peace in Union” are available in our Gift Shop.)