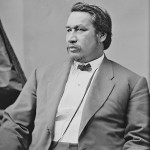 Ely S. Parker was a Seneca Indian born in 1828 on the Tonawanda Indian Reservation in western New York. The Senecas were one of the tribes of the great Iroquois Confederation called the Six Nations. By the time of Parker’s birth, this once powerful confederation had been reduced to a scattering of reservations struggling for identity and survival. Many had chosen to adopt the ways of the whites, hoping in this manner to improve their situation. One such individual was Parker, who early in life determined to live and succeed in the white world.

Ely Parker’s family was well respected and well versed in the ways of the whites. In fact, Ely’s grandmother had been white, a fact of which few were aware. Like most of his tribe, he had two names. He became Do-ne-ho-ga-wa, or “Open Door”, as an adult, but his white name was Ely Parker, a name he readily adopted. Ely excelled in school and became extremely fluent in English. When still a teenager, he was one of three chosen to meet with President James K. Polk to discuss grievances over the sale of reservation lands to a land developer.

Realizing the significance of the law to his future and that of his people, he turned his attention in that direction. But his hopes of becoming a lawyer were dashed when no way could be found around a New York State law which prohibited aliens from being admitted to the bar. Indians at this time were not citizens, despite being native born. 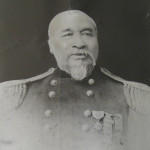 Ely next turned his attention to engineering, another subject which he mastered with determination. His work dealt largely with the construction and maintenance of canals. But in 1857 he received an appointment from the Treasury Department to superintend the construction of a custom house and marine hospital in Galena. It was during his time in Galena that he became acquainted with U.S. Grant and others who would achieve recognition in the war to follow.

By 1863, two years into the Civil War, Parker found himself on Grant’s personal staff. A year later he became Grant’s military secretary and served at the General’s side until Appomattox, where he copied the terms of surrender given to Robert E. Lee.

Grant did not forget Parker when he became President. Because of his loyalty and impressive record, he was appointed Commissioner of Indian Affairs, the first Indian ever to hold the office. It was a short-lived career, however, for after but two years he was charged with the misuse of federal funds. Although largely vindicated, he resigned and turned his attention away from government.

To the astonishment of many, he married a white woman young enough to be his daughter, Minnie Sackett. They would eventually have one daughter. He also made a small fortune on Wall Street, only to lose it a few years later. Ely finally slid into an engineering post with the New York City Police Department, a position he held until his death in 1895. And so ended an incredible career.