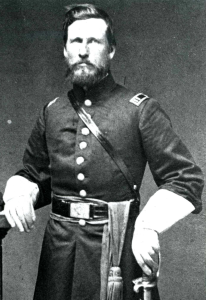 Biography: For many, John C. Smith is one of the lesser known of Galena’s nine generals. Smith was born to a highly patriotic family of Philadelphia, February 13, 1832. In reaching adulthood, he trained as a carpenter and set out on his own. He moved to Galena around 1854 and formed a construction and carpentry firm with B.W. Marble. Within the course of only four short years, Smith and Marble worked on many notable projects throughout Galena and the surrounding area. These projects included the Methodist Church on Bench Street in Galena and the Custom House-Post Office in Dubuque, which Gen. Ely S. Parker was also a contributor. In 1856 he married Charlotte Gallagher (often seen as Gallaher) and called her “Lotte” for short. She was another East Coast transplant and one of Galena’s most eligible young women, with whom he would eventually have five children. Then, in Spring of 1860, the American Civil War broke out. Smith enlisted in 1862, as a part of the 96th Illinois Volunteer Infantry Regiment, and was elected Captain of Company “I”. As the war progressed, John showed continued leadership capabilities and bravery, especially at the Battle of Chickamauga (September 1863), rising in rank to Lt. Colonel. However, due to an injury at the Battle of Kennesaw Mountain (June 1864), he spent the remainder of the war serving various bureaucratic commissions. His father and two brothers also served as Union soldiers. Charlotte was often nearby with the children and helped serve the wounded soldiers. This earned her the name, “Mother of the 96th”. On February 20, 1865, John was brevetted Brigadier General for his meritorious service.

After the war, John C. Smith was appointed assessor for the Department of Internal Revenue. He moved to Chicago in the early 1870s and was involved with several business ventures. He became increasingly involved with politics at this time and served various state-level positions, including Lt. Governor of Illinois from 1885 to 1889. Smith died on December 31, 1910 and was buried in Galena’s Greenwood Cemetery.

Acquisition: The Galena-Jo Daviess County Historical Society houses and preserves artifacts and documents that are important to the stories and histories of Galena’s multi-faceted past. An important facet to Galena history is, of course, the Nine Galena Civil War Generals, all of whom are represented in the collections in some way.

For most of these men, some sort of Civil War-related artifacts are held: swords, rifles, gloves, and riding equipment, for example. Most of the generals are also represented by documents in the archives. These papers are exceptionally important to the mission of the Society and to the longitudinal memory of the community. They help us recreate moments in past people’s lives. They are used by us in building exhibits and meaningful museum displays, but also by academic and genealogical researchers. Historic document archives are priceless and we are very fortunate to have access to them right here in Jo Daviess County.

Until now, John C. Smith has been the most under-represented Galena General in the Historical Society’s archives. Thanks to an anonymous sponsor, we have been able to purchase a collection of John C. Smith documents at auction. Included in this collection are a series of letters from the battlefield at Chickamauga and a post-war cabinet card of him and Charlotte. Detailed in his writings are colorful accounts of the battle and the actions of Galena/NW Illinois’ young men; he describes both the horrors and successes that they were encountering. This invaluable collection helps us attain a clearer understanding of the sights, emotions, and challenges people faced. The final sale price for the collection, before commission, insurance, shipping, and handling: $8,000. Many thanks are due to our sponsor.

“We threw the 1st Div[ision] into line of battle and moved on the enemy and were heavily engaged. The 96th taking the right of the front line and moved up to a rebel battery in gallant stile we fought two hours and drove the enemy but at a terrible loss. They massed again and attacked us. We fought them until dark when we ran out of ammunition and had to fall back. The 96th took in 500 men and came out with 50. Our Div[ision] lost at least 1200 men. . .” September 20, 1863, after the Battle of Chickamauga.

“God bless you my wife and a sweet kiss to you and the boys. Love every one of the 96th for they have done nobly. No Reg[iment] on the field have done better. They are worthy of Old Jo Daviess.” September 20, 1863, after the Battle of Chickamauga.

“. . . about to leave for Nashville. There is no telling when I can hear from you and oh how anxious I am to know how my boy Freddie is. I do pray that he is better and my other Boys and Gus are in good health.” November 3, 1863. Freddie, the Smith’s youngest child at the time, died the following day.